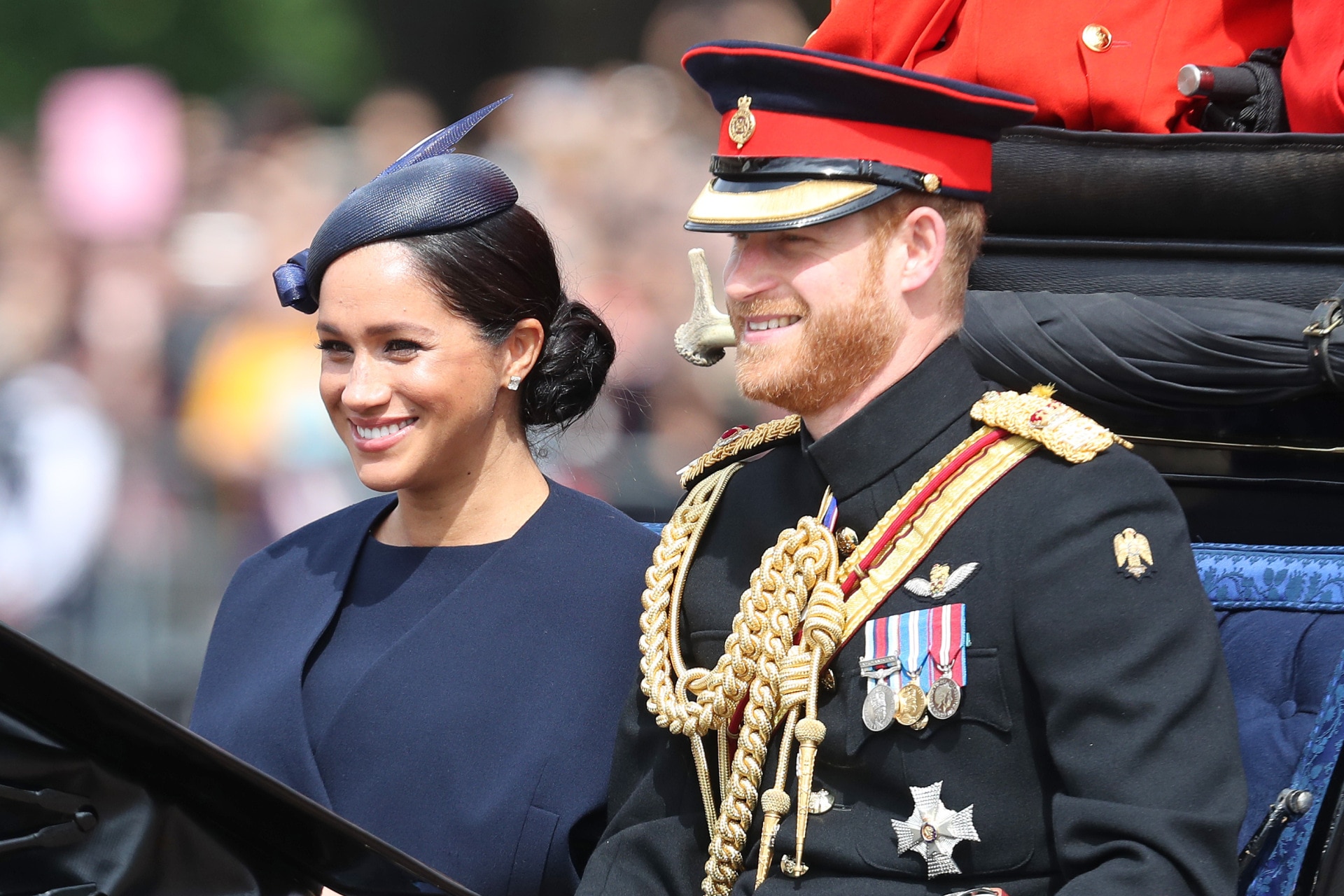 The Duchess of Sussex debuted a new sparkling ring at the Trooping the Colour ceremony this past weekend.

The Duchess of Sussex paused her maternity leave last weekend in order to join the royal family’s celebrations of Queen Elizabeth II’s birthday. The entire family were out for Trooping the Colour, which commemorates the official birthday of the British sovereign.

The Duke and Duchess of Sussex joined the Duchess of Cambridge and the Duchess of Cornwall for a carriage ride as part of the Trooping the Colour parade, before appearing with the royal family on the balcony of Buckingham Palace.

It was during the carriage procession that the Duchess of Sussex took off her navy gloves to reveal a new piece of jewellery. While previously the duchess wore two rings – her engagement ring and wedding band – she is now wearing a third, sparkling diamond ring.

A closer inspection proves the ring to be a silver pavé-set band, meaning it’s totally covered with diamonds. Given it’s being worn with both her engagement and wedding band, it appears to be an eternity ring, which symbolises commitment. You can see the ring up close in the picture posted by a fan account below.

People has confirmed the ring was indeed a gift from Prince Harry, though it’s not known whether it was gifted to the duchess on the birth of their son, as a “push present”, or on the occasion of their first wedding anniversary. People is saying it is the latter. Either way, it is most definitely a symbol of the couple’s eternal love, which makes this ring one very special piece of jewellery.

This was the Duchess of Sussex’s first public appearance since the couple debuted baby Archie at Windsor Castle last month. The new mother wore all-navy Givenchy for the occasion, removing her elegant coat while on the balcony of Buckingham Palace to reveal a matching dress that featured white accents on the shoulder.

The couple were joined by the rest of the royal family for the annual celebrations, which has a rich history going back more than 250 years. It originated from when royal palace guards would assemble to “troop” colours – meaning they would show off a regiment’s colour by way of brightly colour flags, which could be seen above any action during battle. In 1748 it was also declared the official birthday of the British sovereign, meaning that regardless of a king or queen’s date of birth, their birthday is officially celebrated during the Trooping the Colour weekend.

In modern times, the parade showcases soldiers, horses and musicians who display their military capabilities to the royal family in the centre of London, which concludes with a 41-gun salute. The royal family then congregate on the balcony of Buckingham Palace to watch the Royal Air Force flypast display – hence why we see so many pictures of the family looking up into the air.

This year’s Trooping the Colour also marked Prince Louis’s debut at the event, though baby Archie seems to have been just a bit too young – we can expect him to make his debut next year. Prince Louis was seen perfecting his royal wave from the safe arms of his mother, the Duchess of Cambridge.

Although Markle joined the family this weekend, she is not officially back from maternity leave yet, so make the most of these pictures as we don’t know when we’ll see her next!

Keeping Calm in the Storm: Navigating Your Small Business in Uncertain Times

A judge said a teen accused of rape deserves leniency because he came from...

Why You Need Carbs